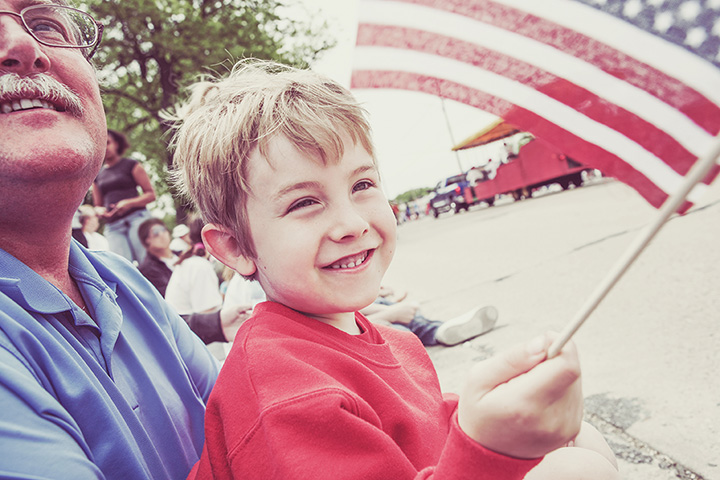 For most American, Memorial Day is the official kick-off to summer: barbecues, swimming, road trips, baseball games. But it roots are in something far more solemn, namely, the end of the Civil War.

Just three weeks after the Confederate surrender, over 1,000 freed slaves gathered in Charleston, SC at the site of former camp for captured Union soldiers. Hundreds of prisoners had died in the camp as the war came to a close, and had been hastily buried in a mass grave.

The former slaves were accompanied by some white Charlestonians and regiments of the U.S. Colored Troops, and were there to consecrate a new burial site. That impromptu ceremony is considered the first Memorial Day tribute.

Prior to the end of the war, Southern women had been in the habit of decorating the graves of their dead: in May 1868, General John A. Logan, commander of a Union veteran's group decreed that May 30 should be a nationwide day of commemoration. Citizens were asked to decorate the graves of the 620,000 soldiers who had died during the Civil War, and whom were buried in towns and villages throughout the country. That date was supposedly chosen because it was one of a handful of days that didn't mark a battle.

There are thousands of parades and ceremonies around America, but here are some that will really make your heart swell with pride and appreciation!

No surprise that our nation's capital should be the site of the most awesome parade. The American Veterans Center hosts the event which attracts 250,00 people, and honors military personnel from the present day all the way back to the Revolutionary War. Naturally, the route takes it past some pretty stirring monuments and landmarks in the city, including the White House.

It's only fitting that a city that played in the formation of America has a parade to match its revolutionary spirit. It starts in Harvard Square - and be ready to put your fingers in your ears, because a cannon salute kicks things off. The route winds through town, ending at the Cambridge Cemetery. Another touching tribute is the "Garden Of Flags," thousands of flags placed on Boston Common to honor military heroes.

One of the coolest elements of this city's parade is the Mattatuck Drum Band. First organized in 1767, it's the oldest fife-and-drum corps in the country. The band (with different members, naturally!) paraded during Lincoln's campaign, performed for Ulysses S. Grant and performed during JFK's inaugural festivities. They're truly a part of American history.

This parade is the oldest, continually run parade in America, having first stepped off in 1867. The route winds through the borough, ending at John Paul Jones Park for a memorial service. Memorial Day also coincides with Fleet Week, as Navy members arrive in New York City.

In another New York City boro (Queens), the parade has taken place every year since 1927. It heads down Northern Boulevard from Great Neck into Douglaston, honoring the military - and showcasing other civic groups like the Boy Scouts and Brownie troops. It's one of the biggest parades in America.

Since Memorial Day is a holiday rooted in the end of the Civil War, how appropriate that this town, so identified with that conflict, should host a parade. It's among the oldest continuing parades in America, originally established by the Sons of Union Veterans.

It's one of the largest parades in the nation, and an institution in the city since 1870. Before it starts, a wreath is laid at the Eternal Flame in Daley Plaza to honor the fallen. Then 10,000 people take in spectacular floats, musical corps and drummers along the parade route.

The annual Memorial Day Parade has been running continuously in this St. Louis suburb since 1868, making it one of the oldest in the country. The Flower Guard collects flowers from the crowd on the way to Upper Alton Cemetery, where they're used to decorate soldier's graves.

Commerce City, a Denver suburb, hosts the largest parade in the state. Along the almost 2 mile route, expect lots of patriotic floats, military bands and units, plus antique cars - and horses!

The Presidio (a former military base turned park) is the site of the city's tribute to veterans. The 191st Army Band starts the event, which includes military personnel, floats, classic cars and veterans from several wars. It ends at the National Cemetery, where a solemn ceremony is held.

It's not a parade, but their tradition for honoring fallen heroes is pretty spectacular: a thousand candle-lit lanterns are floated off shore of Ala Moana Park as a way to comfort the spirits of the deceased. Tens of thousands of people line up to witness this ceremony on Memorial Day.